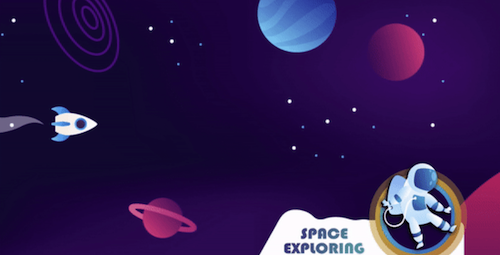 We've been mostly quiet about our latest ad format. In fact, there's a decent chance you haven't even heard of “In-Video” — unless you caught our beta launch with Sprint last year. The reasons behind our soft launch are manifold, but, as ad spending picks up in Q3, I want to give In-Video a coming out party of sorts. That's the least it deserves.

What is it? A 10-second animated overlay that appears at the bottom of streaming video content during playback. We modelled it on the stylish, eye-catching, and non-interruptive animated “logo bugs” and banners that are now common in broadcast television — but designed it for programmatic delivery across web, OTT, and CTV.

Every once in a while, a new ad format is introduced that fundamentally changes how brands approach digital advertising. Search ads. In-Image. Expandable. Pre-roll. Well, I think In-Video could have a similar impact. I'm not guaranteeing it — I can think of at least one potential hurdle to widespread adoption — but, in the past 5 years, no one (including GumGum) has produced a more intriguing or timely new ad format.

Why do I like In-Video so much? Numerous reasons. I'll lay them out in no particular order.

It taps a new inventory well

In-Video generates new ad inventory where none currently exists. The formats that dominate video precede (pre-roll), interrupt (mid-roll) or follow (post-roll) the videos users are watching. Those formats live outside of the content itself. In-Video establishes inventory within the actual content — tapping an entirely new unused advertising space. As such, it provides a new stream of revenue for publishers and allows brands to place messages where users' attentions are actually focused. Meanwhile, it doesn't actually compete with traditional interruptive video formats. In fact, the new advertising opportunity In-Video represents both lowers the barrier to entry for brands wanting to advertise around video content and, when used in tandem with interruptive video formats, give brands the opportunity to maximize a video content take-over.

In a recent report on the state of video advertising that we produced in partnership with Digiday, marketers said that one of the biggest challenges they face with video advertising is unsatisfactory completion rates. Not a shocker. Users are there for the content, not the ads. Most users will immediately go for the “skip ad” button (when available) or (when skipping is not an option) redirect their attention to something else until the content they want to see begins to play. That's rather troublesome considering the costs — creative production and CMP — of running video ads. With In-Video, we've introduced an intrinsically unskippable format. Since the ad is integral with the content, skipping an In-Video ad requires skipping the content itself. So if an In-Video ad doesn't play to completion, it's because the user found the content, not the ad, unsatisfactory.

For several reasons, In-Video offers a more favorable cost-benefit balance than other video formats. Firstly, launching an In-Video campaign requires a tiny fraction of the cost and effort required for traditional video campaigns. Just developing and producing the creative for pre-roll ads (and the like) is a costly, time-consuming process plagued by uncertainty and risk. The characteristics of the format — skippability, most notably — demand bespoke creative tailored to quickly convey a message before users skip or lose interest and offer enough intrigue to, ideally, hold people's attention beyond the first few seconds. That's a tall order — one rarely met. Then, when the campaign runs, advertisers pay the same CPM whether the ad plays to completion or users turn their attention to something else. And, of course, it is nearly impossible to change the creative direction of a pre-roll or mid-roll campaign to adapt to unforeseen changes in the market. Brands can only pull or pause campaigns (as so many have in recent months). In-Video, meanwhile, is subject to none of those concerns. The creative can be produced by a single designer applying the same approach used to create an animated In-Image or In-Screen creative. In fact, In-Image and In-Screen creatives could easily be retrofit as In-Video creatives. An In-Video campaign could be conceived and launched in less than a week — and changing messaging mid-campaign, if necessary, is just as easy. Plus, unlike other video ads, the vast majority of In-Video ads will be seen and viewed to completion. All this means more consistent and dependable results in a cheaper, easier to execute, more flexible package.

The primary reason we developed In-Video was to deliver highly visible brand messaging that doesn't gall or alienate audiences. Why? Well, a couple years ago we polled over 300 marketers and learned that the top three challenges for digital video advertising were “annoyed viewers”, “ineffective creative” and “ad skipping”. In the same poll, half of the marketers we spoke to rated the pre-roll experience as “fair” to “poor” and they said that viewers skip pre-roll primarily because the ads are unengaging and intrusive. That sentiment hasn't changed. Of the marketers we surveyed with Digiday this year, 45% said that consumer demand for non-interruptive experiences will “heavily impact video strategy in the future.” Consumers are demanding non-interruptive experience, because they have more options for where to consume video — like OTT — and many of those options place a premium on UX. In-Video gives brands the opportunity to approach consumers in the fastest growing digital content category without ruffling their feathers or causing them to take flight to sources with less annoying advertisements.

So what, you may be wondering, is the hurdle to adoption that I mentioned earlier?

This format was designed to be unclickable (gasp!). To be clear: Nothing is stopping us from giving In-Video click-through functionality. This is a conscious, philosophical choice. We believe that the long-term success of digital advertising writ-large requires that we as an industry place a premium on ensuring that the content consumption experience continues to please people and hold their attention.

The advent of ad blockers, the growing popularity of browsers like Brave, data privacy regulation, the slow impending death of the cookie, and the growing success of ad-free content subscription models together indicate a simple truth: The audience for digital ads is getting weary of our industry's antics. As the leader of a company helping drive digital advertising into the future, I believe that it is our responsibility to build products that place a premium on keeping the user on the page, engaged with content, and coming back to the site regularly.

That means developing products that don't undermine, interrupt, or link away from the content. That means developing products for digital that function like traditional advertising in broadcast television, out-of-home, and print — delivering brand messaging to engaged audiences without the expectation that they will buy now, but with the expectation that they will buy. That means putting aside performance marketing in favor of brand marketing. That means acting on what most people in our industry know in their hearts — that CTR is, more often than not, a metric of dubious merit — and instead embracing far more credible metrics like ROAS and ROI, even if that means waiting longer for results to show.

This is the shift that needs to happen in our industry, not just for GumGum's In-Video to be as impactful as it can be, but for the promise of programmatic OTT and CTV to be realized. Users want to be where the best content and best experiences exist — and that's where advertisers want to be too. It's time we as advertisers started doing our part to ensure that our work doesn't inadvertently estrange those users — and that's what we're starting to do with In-Video.

1) In-stream overlays are available within the walled garden of YouTube, but not on native publisher video content which is the market GumGum In-Video serves.