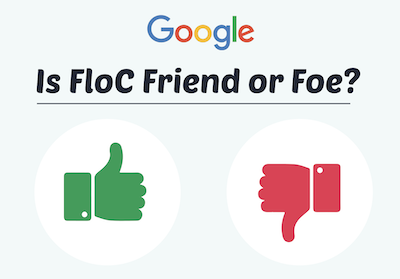 What does Google's FLoC mean for digital advertising? Marketers and industry experts weigh in.

Google has introduced a new way to track users after it phases out third-party cookies. The Federated Learning of Cohorts, or FLoC, is part of Google's proposed “Privacy Sandbox.” It replaces individual user tracking by algorithmically generating cohorts, segments of thousands of users determined to have similar interests and behaviors based on the sites that they visit.

Since FLoC is still in the early stages of testing it's hard to know exactly what it will look like as a fully realized product, but given Google's role in the industry, it's sure to be influential. Unfortunately, lawmakers, digital privacy experts, marketers, and publishers are already raising red flags.

Several industry bodies concerned with consumer privacy have voiced concerns about FLoC. Among the strongest critics is the Electronic Frontiers Foundation. In a blog post, EFF staff technologist Bennett Cyphers notes that while FLoC does eliminate some immediate privacy concerns around the targeting of individuals and the sharing of personally identifiable information (PII) “the technology will share new personal data with trackers who can already identify users.”

The solution also does little to address wider concerns about the discriminatory impact of data-driven targeting, According to Cyphers, “The power to target is the power to discriminate. By definition, targeted ads allow advertisers to reach some kinds of people while excluding others.”

Jason Kint, who leads the digital publishing trade group Digital Content Next, shared his concerns in a Twitter thread []. An outspoken critic of the platforms, noted that FLoC doesn't go far enough to address consumer concerns about surveillance-based advertising. According to Kint, FLoC repeats the “current ecosystem that devalues ad inventory on trusted, quality sites, blending data and value of inventory horizontally across [the] web resulting in automated markets bought and sold based on surveillance over context.” In doing so, it fails to recognize the inherent exchange of value between consumers and publishers.

It's fair to say that U.S. lawmakers have historically been behind the curve when it comes to digital advertising. Mark Zuckerberg's famous “Senator, we run ads” retort to Orrin Hatch still resonates with many as the benchmark for Congress's grasp on the ad tech ecosystem. However, members of Congress seem to be catching up and several had more pointed questions about FLoC in a recent hearing before the House Energy and Commerce Committee.

Congresswoman Yvette Clarke of New York questioned Google CEO Sundar Pichai about FLoC directly, questioning whether there was the risk of discrimination inherent in the “biased and disparate impact of machine learning algorithms” used to build FLoC segments. In his response, Pichai cited the company's internal AI principles, which broadly favor building tools that do not discriminate based on race or other legally protected demogrpahic classes, and Google's previous anti-discrimination partnerships with federal agencies. However, he also stressed that FLoC was still in the early stages of development and so no specific precautions yet exist to curb algorithmic discrimination.

Among marketers, the cohort most likely to feel the impact of Google's new cohorts, FLoC has raised more questions than overt concerns. According to Perianne Grignon, a digital marketing leader and partner at consultancy Media Plus Advisors, change will be hard for marketers who are steeped in the current processes of audience and behavioral targeting. “Any type of change is a disruption,” she notes, “and change will force a gap in reporting “BF” and “AF” (before FLoC and after). There's going to be some handwringing across both agencies and advertisers as results will be different going from individuals to cohorts”

According to Grignon, marketers will need to adjust their thinking from a marketing mindset that centers individuals to one that's driven by cohorts, a challenging task given that Google hasn't revealed much about what types of cohorts it plans to build and how wide and deep they will be. She also pointed out that FLoC comes relatively late in the game. Marketers have been faced with the end of cookies for more than a year and many have already built out first-party data capabilities in 2020 and early 2021, that would obviate the need for a third-party data solution like FLoC.

However, the tactics marketers are already using may also prove to alienate customers. “It remains to be seen whether a constant asking for an email will essentially annoy consumers,”Grignon said.

Too soon to tell

It's probably too early to make a final judgment on how effective FLoC will be for marketers looking to replace cookie-based targeting, whether it can satisfy regulators, and whether it will lead to the same type of consumer backlash that led to the deprecation of cookies in the first place. However, the initial concerns and questions make it clear that it's too soon for marketers who've been pursuing alternatives to take their foot off the gas. Ultimately the only thing that's certain is that cookies will soon vanish, those investing in alternatives like first-party data and context-driven targeting won't have to hold their breath as Google tinkers with its latest idea.