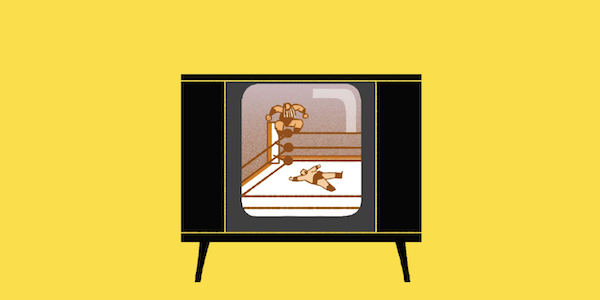 Watching TV isn't just America's favorite pastime: It's more like our second job. Adults in the United States now watch an average of 41 hours of television and video per week, up 17 percent from 25 years ago

At nearly six hours per day, TV and video viewing accounts for more than half the time we spend doing all other leisure activities — and almost as much time as we spend asleep.

What's behind our obsession with moving pictures? There's no single answer to that question, but one recent study suggests that part of the explanation may lie deep within our brains. The study, published in the Journal of Advertising Research, explored the connection between TV viewing and brainwave frequencies, as measured by electroencephalography (or EEG).

Watching TV and video generated brainwaves is associated with pleasant, wakeful relaxation and absorbed cognitive capacity, taking viewers' minds off other things,” the study says. “Total television and video viewing is increasing because it meets basic human needs, especially for relaxation and escape.”

Understanding consumers' desire — even need — for viewing time to serve as escapism can help advertisers make better creative decisions that in turn may boost reach and engagement, the study found. “Television and video advertising creative content should aim to minimize advertisment avoidance by matching viewers' needs for relaxation and escape, entertaining them rather than trying to communicate complex information,” it says.

Of course, consumers' primal thirst for relaxation is only part of the increased viewership equation. In the last quarter decade, opportunities for watching have grown exponentially. Mobile devices now enable consumers to watch TV and video on the train, at the doctor's office or in the bathroom, while streaming allows them to never miss a moment of video content they don't want to.

“Media consumption and TV viewing are increasingly personal,” writes Irwin Gotlieb, global chairman of GroupM, for Adage. “People watch what they want, when and how they want. ‘Watching TV' is less about the device, the living room or the delivery method and more about content.”

Yet as diversified as our viewing experiences have become, traditional television hasn't suffered as much as one might expect. Broadcasts watched on a television set (either live or replayed via DVR) still account for 84 percent of of total viewing time, the research study found. Such viewing continued to climb long after the onset of the digital era, peaking as recently as 2010.

“Americans still watch an absolutely astounding amount of traditional television,” writes Alexis C. Madrigal for The Atlantic. “The '00s saw the greatest growth in TV viewing time of any decade since Neilsen began keeping track in 1949–1950: Americans watched 1 hour and 23 minutes more television at the end of the decade than at the beginning.”

That's not to say the picture is fixed: Newer technologies like 5G may eventually shift TV and video consumption more dramatically toward online viewing, making it even more important for marketers to find ways to minimize advertisement avoidance, the study says. And in an increasingly fractured media landscape, issues like measurement and targeting will be key challenges. Yet the one thing advertisers can count on is consumers' collective allegiance to TV and video, be it rooted in brain chemistry, convenience or a combination of the two.

“One thing is enduring through all of these changes and that is our intrinsic fascination with moving images,” Gotlieb writes. “Viewing is fragmented and will continue to splinter, but TV is not in decline. Instead we have been pivoting from the old TV we consumers cherished, and which we marketers valued, to something even better.”