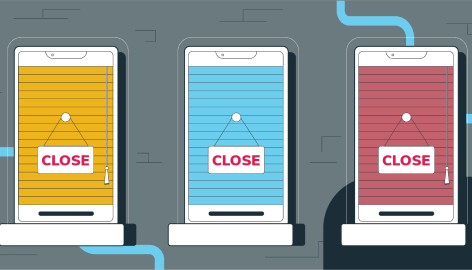 With fewer people opting in, mobile publishers may have to pivot hard.

"Apple's iOS update has the potential [to bring] a big portion of my business to a screeching halt," says Michaela Corning, a hijabi-friendly facemask designer, in a video published in December. She wonders aloud whether she would have ever been able to reach her customer base without Facebook's ads, which connect her directly to buyers she knows could use her niche product.

Corning's is one of several testimonials from small business owners on a web page Facebook launched in December as a way to speak out against Apple's plans to drop its Identifier for Advertisers, or IDFA (set to happen early this spring). A random, unique ID assigned to every Apple device, a user's IDFA tracks their mobile behavior anonymously. While it doesn't tie that behavior to a name or cell phone number, it does tie it all to the user's device, painting a very valuable picture for advertisers looking to target specific people based on what they do on their Apple products and where they're located.

It's not only advertisers who will be affected by Apple's update. Mobile publishers use information gathered from IDFAs to show marketing partners the specific users reached through their apps. From game publishers to Spotify marketers, the coming end to Apple's ubiquitous IDFA poses significant marketing challenges for ad-supported mobile apps.

What exactly is Apple changing about IDFA, and why?

Apple first started mentioning upcoming restrictions to its IDFA over the summer, as part of its iOS 14 updates. Rather than get rid of IDFA altogether, the update will allow Apple users to opt into being tracked when entering each app on their devices. With iOS devices accounting for about 45 percent of U.S.-based mobile users, that's a lot of the market becoming potentially untraceable for advertisers.

"The ecosystem largely agrees that the majority of users won't consent to tracking." - Mark Kellogg, Director of Technical Partnerships

According to Apple, the move is privacy motivated. "We believe technology should protect users' fundamental right to privacy, and that means giving users tools to understand which apps and websites may be sharing their data with other companies for advertising," the company said in a statement to TechCrunch in September. In January, CEO Tim Cook went further, saying, "If we accept as normal and unavoidable that everything in our lives can be aggregated and sold, we lose so much more than data. We lose the freedom to be human." Those remarks were made during a virtual discussion at the 2021 Computers, Privacy and Data Protection conference.

What challenges does this pose for mobile publishers?

As Facebook's sp of ads and business products, Dan Levy, wrote in a December blog post, Apple's upcoming IDFA changes "will force businesses to turn to subscriptions and other in-app payments for revenue, meaning Apple will profit and many free services will have to start charging or exit the market." (It will also make it difficult for Facebook's Audience Network to provide valuable information for its marketing partners on iOS 14 devices.)

Facebook's woes aside, it's true that mobile publishers may have to start looking at other revenue sources. But for those still needing to attract advertisers, the challenge lies mainly in convincing advertisers that these publishers can deliver the desired audiences.

Specific audience information, of course, comes at a premium. Mobile publishers will lose that specificity without IDFA.

How can mobile publishers prepare for a post-IDFA advertising world?

"For many media owners, the ad buying industry's desire to prioritize finding the right users ahead of the right context has sometimes felt a little distorted from where the value is really created," says Matthew Hogg, who works with mobile publishers preparing for this change as the vp of publisher partnerships at digital advertising platform Criteo.

In other words, context—the content within the app—could become a more important talking point for mobile publishers making ad sales. A user's experience in the app likely affects what's on their mind, which can be reflected in the advertisements they see in the app.

"Scale and depth of content," adds Hogg, are also both "incredibly attractive to advertisers." While the former allows publishers to "secure more direct advertising spend from agencies," he says, the latter signifies a "recurring user base that can be monetized through addressable targeting and other initiatives, like subscriptions and events." A big name publisher like BuzzFeed, with multiple mobile apps, will likely remain an appealing investment to advertisers. It's got a lot of content meant to appeal to a certain type of (millennial) audience.

Plus, context can offer information about an app's users. Kellogg gives the example of a solitaire app publisher. "I know that my demographics are probably women between 40 and 55," he says. "So if I go to a demand source whose demographic overlaps with that nicely, [that could be] mutually beneficial." Mask designer Corning, for instance, could feel confident that her ads will reach a relevant audience via an app with content that appeals to a largely female, Muslim user base.

Of course, there's always trying to convince Apple users that it's worth opting into IDFA, something Hogg says Criteo's publishing partners have been working on. For users who value their privacy over supporting their favorite apps through highly targeted advertisements, however, content may remain king.

"With all these iOS changes," says Kellogg, "it makes sense that there will be a renewed focus on contextual advertising."