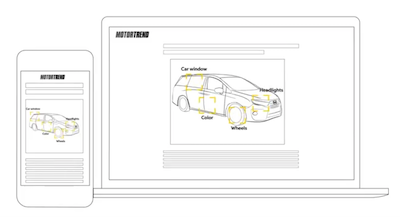 Recently, GumGum an artificial intelligence company with deep expertise in computer vision, was named a finalist for two awards from PR News in the categories Digital Marketing Campaign (500K+) for our work with Honda and RPA and Digital Marketing Campaign (200K-500K) for our work with Go RVing and Richards. These two campaigns were also short-listed for the Effective Mobile Marketing Awards in two categories, Most Effective Automotive Campaign or Solution (Honda/RPA) and Most Effective Travel & Tourism Campaign or Solution (Go RVing/Richards).

GumGum and RPA worked together to support the launch of the all-new redesigned 2017 Honda Odyssey. Consistently the minivan segment leader, Honda's position was being threatened by the Toyota Sienna. With minivan sales declining and the segment becoming more concentrated, Honda wanted to leverage their strong brand and minivan segment loyalty to encourage existing owners and intenders to upgrade to the Odyssey. They wanted to create an emotional connection with their audience in a unique and compelling way.

GumGum developed a custom campaign for Odyssey that leveraged its computer vision and image recognition technology to uniquely reach Honda's target audience, auto-intending moms. GumGum was able to create a Family Summer Movie sponsorship which put the Odyssey message across all family movie content and images in their platform. By aligning with this content, Honda was able to connect with potential customers in a unique and relevant environment.

Odyssey's compelling creative drove a 13.5% engagement rate with their target audience. This is almost five times higher than the industry average. The Summer Movie Sponsorship, which gave Honda 100% share of voice in the auto vertical, drove a ctr of .84%; ten times higher than the standard. By leveraging the unique targeting of GumGum's computer vision and page placements, the Odyssey's creative messaging was seen in the most contextually relevant environments at at a 82% in-view rate.

The campaign for Go RVing — a coalition of manufacturers, component suppliers, dealers and campgrounds — was aiming to increase awareness and make RVing cool and more mainstream, and therefore more appealing. Go RVing wanted to speak to these self-reliant, adventurous people meeting them from a place of shared interests in things like traveling, road trips, being outdoors, spending time with family, camping, visiting national parks, outdoor activities (biking, kayaking, etc.), and sightseeing and leverage those interests into awareness of GO RVing. Furthermore, GO RVing wanted to encourage interaction and create a new generation of RVers.

GumGum created a campaign that leveraged its platform's computer vision and image recognition technology to place Go RVing's message directly within hyper-relevant content where it would resonate the most. With computer vision and image recognition, GumGum identified and then surrounded content relevant to Go RVing's consumers — quite literally with GumGum's in-screen frame unit.

Contextual relevance is king and that helps to power better performance. On this campaign, we achieved a click thru rate that is 15x the industry standard and had a view conversion rate of 31.8%. That meant that Go RVing was in an environment where people were interested in what they had to say and that was done via computer vision identifying images related to camping, RVing, travel, national parks, etc. It was further boosted by our semantic analysis that identified those keywords to ensure the campfire image wasn't one of transients but of vacationers, this is also a component of how our artificial intelligence keeps brands safe. Ultimately for Go RVing, they generated more clicks and web traffic via our ad because we were finding the people that were predisposed to be interested in their message while other firms would miss them by only relying on one targeting method.

PR News' Digital PR Awards celebrate the year's most outstanding digital communicators and campaigns in a variety of media such as video, website design, mobile apps and more.